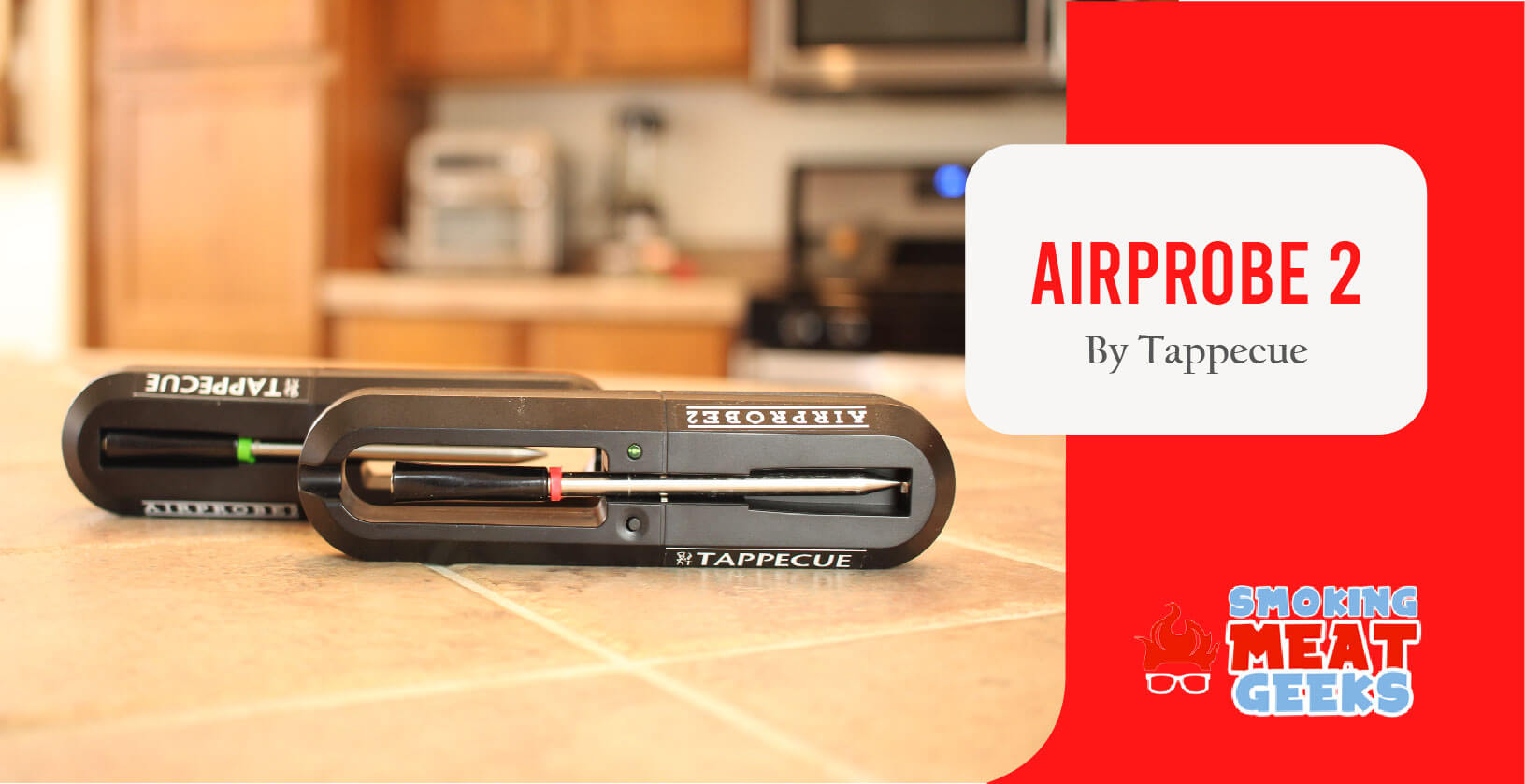 The Tappecue AirProbe 2 is a wireless Bluetooth thermometer that promises to be your meat thermometer and pit thermometer in one completely wireless package. In this review, we test it out for accuracy and usability to see if it can meet the challenge.

If you open up the thermometer cupboard at Smoking Meat Geeks World Headquarters, you’ll wish you hadn’t. It’s a giant tangle of probes and wires and chargers and clips and who knows what. The promise of Tappecue’s AirProbe 2 is simple: you don’t need any of that junk. A single probe monitors both meat and chamber temperature. It charges in a wireless dock off a AAA battery and communicates with your phone directly via Bluetooth. No wires, no expensive base station — can such a dream be possible?

The AirProbe 2 is a two-channel wireless probe thermometer. Channel one, for the meat, is in the ¼” thick tip, which must be inserted to a minimum depth of 2¾” to protect the device from the heat. Channel two, for the chamber, is in the plastic base. It can communicate via Bluetooth either directly to your phone or to a Tappecue base station. The AirProbe 2 charges from a AAA battery in a charging cradle with a magnetic mount. There are no wires anywhere, so the whole thing can live on the front of your fridge.

Obviously this is very limited compared to full-featured wireless thermometer systems like the Tappecue Touch, and certainly can’t run a thermostatic pit fan, but the virtues are equally obvious. The AirProbe 2 is simple to set up, simple to store, and cheap. If it can handle the job, this will be an ideal starter thermometer for the aspiring meat geek or the ready extra for someone who already has a larger system. It’s also great for taking on the road as a pocket-sized unit. I really want this to be great.

I downloaded the Tappecue app, and got an account set up with just one minor hiccup. Bluetooth pairing was super-simple — I just got the AirProbe 2 out of the cradle and the app quickly picked it up. Each AirProbe 2 has a color-coded band, and the app matches up the colors, making it easy to tell which is which.

Charging is easy too. Just pop the AirProbe 2 back in the cradle and it automatically charges. There’s a button on the front to display the charge level on an LED. Tappecue says that the probe is dishwasher-safe, but I don’t have a place it can safely sit in my dishwasher, so I’ll have to take their word for that.

To take the AirProbe 2 for a real test, I made milk-braised pork loin in a Dutch oven. After searing the pork and preparing the braising liquid, I tried to insert the thermometer into the center of the pork and ran into a problem. I normally would insert a thermometer probe into the top of the loin, but the AirProbe 2 must be inserted at least 2¾”to protect the electronics and no more than 3⅜” because that’s where the handle starts. The loin was too short to go in the top, but too long to go in the end. The right answer is probably to take an angle from the top, but that’s going to require a very careful approach. The probe is extremely thick at ¼” diameter (most probes are ⅛” thick), so I didn’t want to punch multiple big holes in my meat. 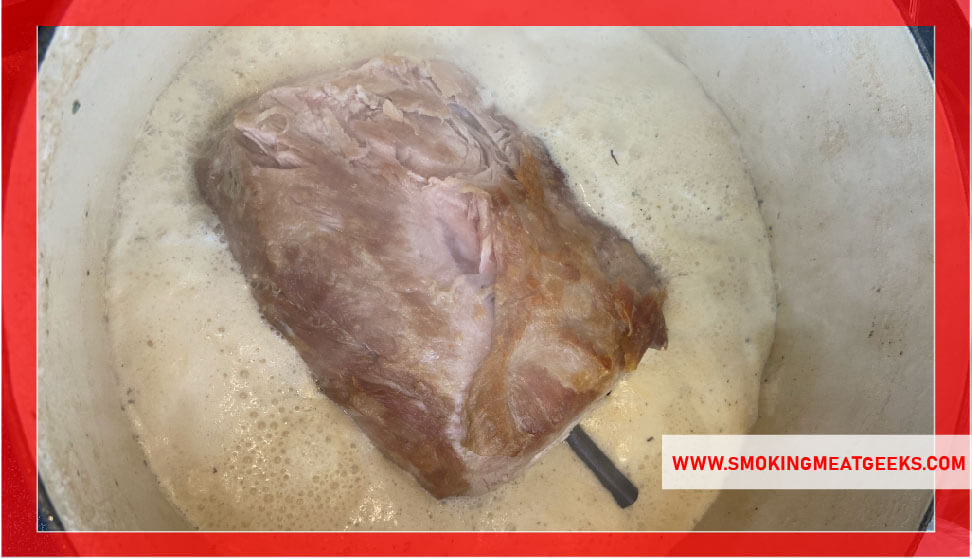 Once I got the thermometer in the pork and the pot in the oven, I set an alarm for 140°. The app promptly lost contact with the probe. I know transmitting from inside a cast-iron Dutch oven inside an oven is a tough environment, but that’s why you’d buy this thing. The connection was spotty throughout the cook, but it did its job. The problem: as soon as it lost connection, the app dumped my alarm. I had a timer going and was keeping an eye on the temperature, but that’s not acceptable.

Overall, it worked, but it’s shaky and requires careful shepherding to get to the finish.

The accuracy of the AirProbe 2 is idiosyncratic. I set two probes on the table top while syncing up with the app, and got a very strange result. Both meat probes read 62°, but the chamber ends read 66° and 71°. Either there’s a massive temperature gradient moving across my table, or these things are shaky on accuracy. In case these are slow to come to a reading, I let them sit for 10 minutes to be sure, but the readings stayed the same. 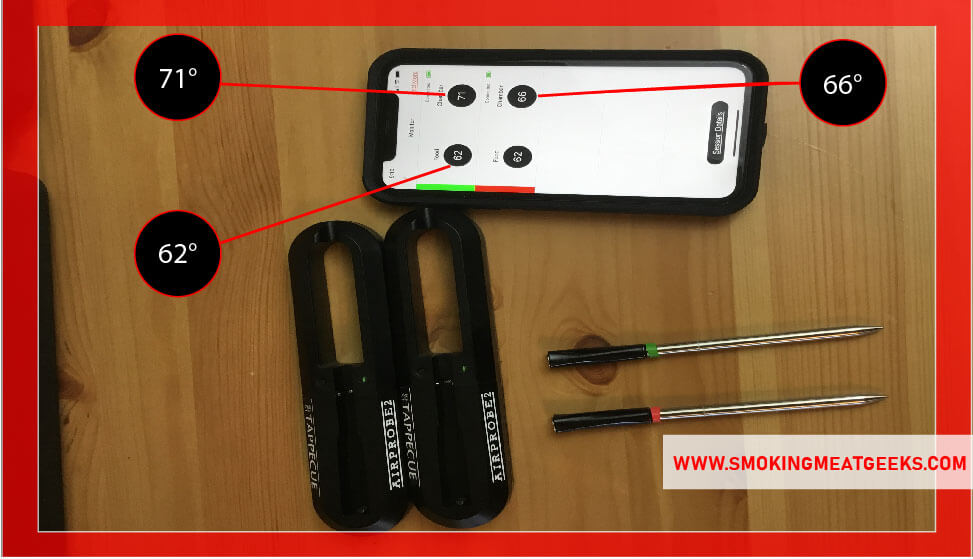 On the good side, I set up the High Tech Science Gantry over a pot of sous vide-controlled 140° water, and the AirProbe 2 registered 140° on the nose, within half a degree of the Thermoworks Calibrated Reference Thermometer.

For a high-temp measurement, I took the water up to boiling. Where the calibrated thermometer measured the boiling water at 210.01°, the AirProbe 2 measured 201°. I gave it some time to see if it would improve, but it never wandered closer to the true temperature than 203°, and then wandered back down. 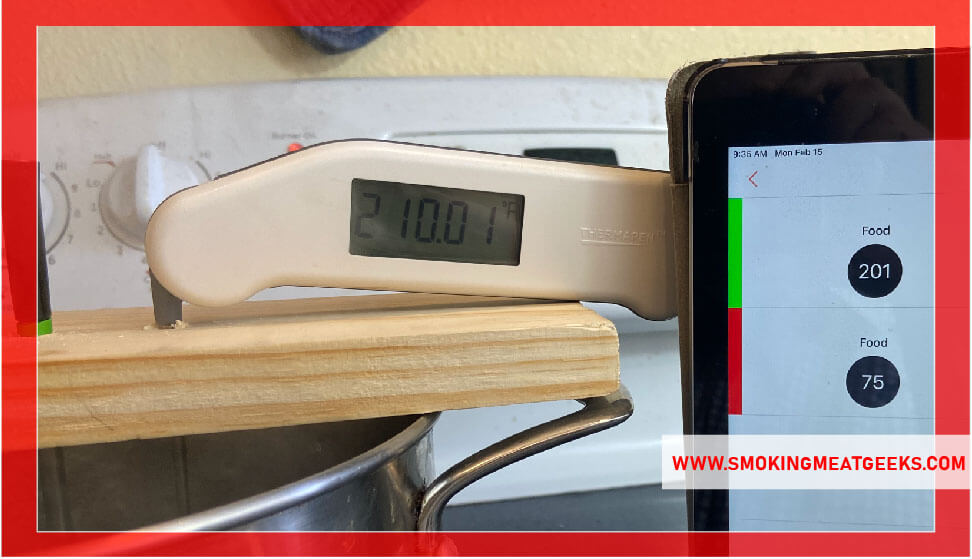 I tested again, this time adding more water. It appears that the sensor has to be inserted at least halfway to the insertion line to get a correct reading. That’s good, inasmuch as it’s more accurate than I feared, but where is the reading coming from in my food? Traditional probes measure about ⅛” behind the tip, so you get a reading from the center of your food by putting the tip right in the center. Where do I have to position the AirProbe 2 to get an accurate center temperature?

So how does that add up? It seems the meat probe is good in meat ranges, but diverges as the temperature increases. It’s harder to say on the chamber probe. At room temperature, it had obvious problems. In a braising environment, it was in the neighborhood I expected. In a hot oven, it seemed quite low (reading 368° in an oven set to 450°). I guess the AirProbe 2 has enough accuracy where it counts, but it doesn’t compare to, say, wired Tappecue probes, which work in all the ranges in the spec.

The app is strange and confusing. It feels as if it was written by someone who intimately understands the whole Tappecue thermometer ecosystem, but never got any serious testing and feedback from anybody else.

If you try to Start Session, you’ll find that only works with a Tappecue base unit. Instead, you go to AirProbe Direct, where you can view current temperatures. From there, you can click on Session Details to see the usual variety of graphs and alerts. Once you’ve (automatically, I guess) started a session from the AirProbe Direct screen, you can go back to the main menu and see that session in the View Session menu.

I’m sure that makes sense to the person who wrote the app. 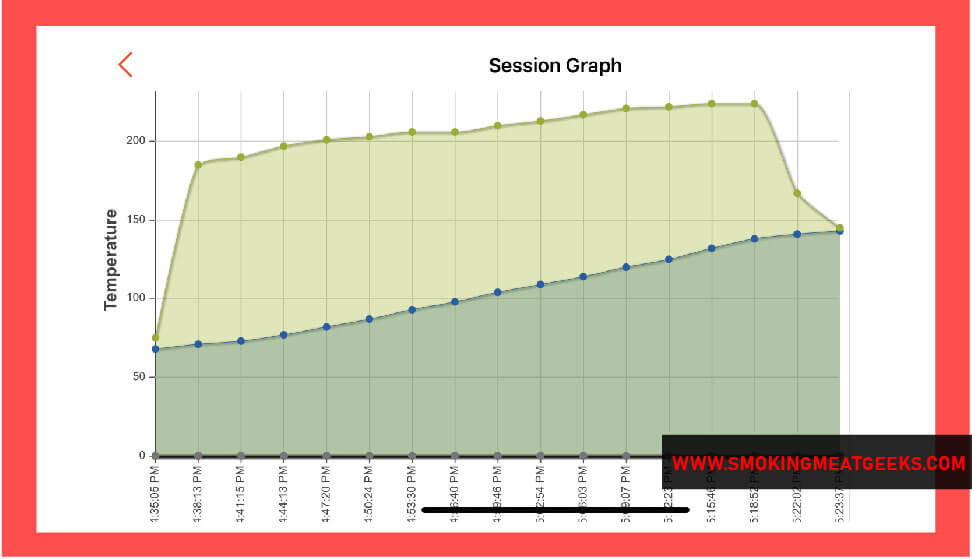 When you complete a session, you get the opportunity to get the data emailed to you. It also can be saved in the Session Book tab, but you only get five free sessions a month in the Session Book before they want a monthly fee or a per-session fee. Can’t say I’m a fan of that either. You do get a nice set of graphs and notes.

I love the promise of the Tappecue AirProbe 2, but the execution is not quite there. The requirements of how it has to be inserted really limit its placement compared to wired probes. I have reservations about accuracy, especially on the chamber probe. Finally, the app has serious usability problems. As much as I’d love to ditch the wires and charging cables, this just doesn’t do a good enough job to replace a wired probe thermometer. I retain high hopes for the next version, but the technology here isn’t yet up to the task.

Complete Wireless Probe Testing on YouTube
Here’s our complete testing of these wireless probes. The complete article featuring these other devices is currently pending publication. Check back here for the detailed writeup or watch the video now: 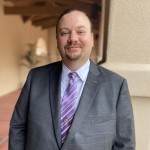