As smoking food makes its way into the mainstream,  not everyone owns a smoker, but a large majority of American families own a kettle style grill.

The Slow N Sear is revolutionizing backyard smoking. Read on and you’ll understand. Why has nobody thought of this before? It makes smoking so easy.

The Slow N Sear (SNS) easily creates two cooking zones in the grill, a direct heat zone (searing) and an indirect heat zone (smoking). It is easier to set up and maintain than the snake method which is also very popular for Weber grills. Now, you don't need a SNS to smoke food on your kettle style grill; but it makes it a heck of alot easier.

Smoking with the Slow N Sear

Set the SNS in the grill. Get some coals started in your chimney, or dump about a dozen coals into the SNS and get them started. Once the coals are hot and in the SNS, fill the rest of the SNS with coals. The non lit coals will catch and be ready for smoking in about 20 minutes.

The SNS holds about 90 briquettes, good enough for about 7 hours of smoking time. It's best to fill the SNS about 1/3 of the way (instead of filling it to the brim) to avoid having to wait for the internal temperature to drop to the ideal smoking temperature of 225 - 250°F.

Once your internal temperature is around 250°F, you're ready to smoke. Note: the bi-metal dial thermometer that comes with your grill is likely not accurate, it is a good idea to invest into a grate thermometer you can leave inside the grill throughout your smoking session.

Next, fill the reservoir with water, about 1 quart. 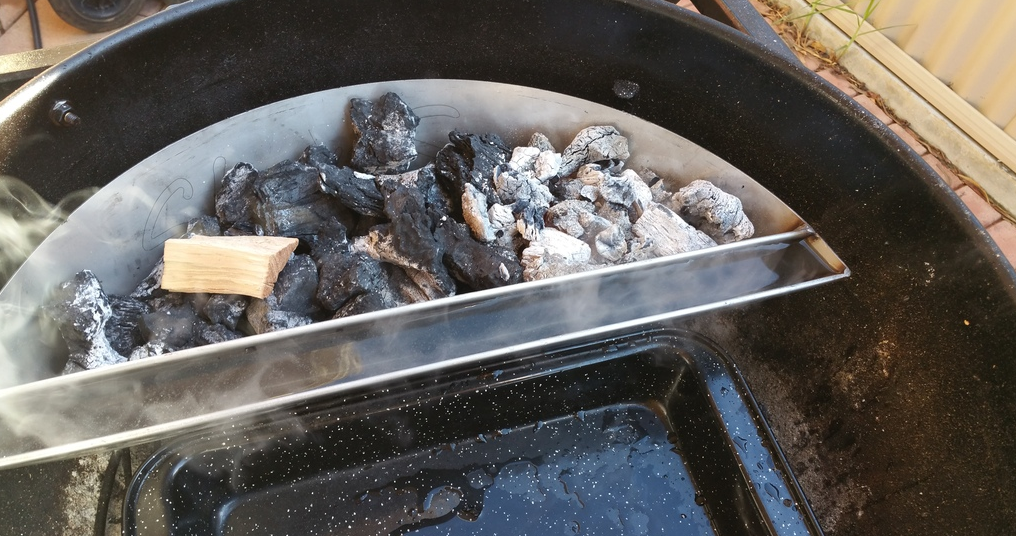 If you can, use hot water. Then the charcoal doesn’t need to expend energy heating the water up. This water will give you 5 or more hours of steam elevating the smoke flavor of your meat. It also drastically helps in maintaining the proper temperature of the smoker. The reservoir also acts as a heat barrier between the coals and the meat.

Smoking with the Slow N Sear

When you place your lid, set the vents over the top of the smoke side and adjust the vents to set your temperature. Leave the top vent slightly open until the temperature gets around 200 degrees. Then you can begin to make adjustments until you’ve reached the desired temperature. Because the SNS burns charcoal so efficiently be prepared to have the vents more closed than you are used to. Also be aware that even very small changes in the vents can have a huge effect on the temperature inside.

Make sure your lid is airtight, the temperature will be difficult to control if the air is flow isn't regulated.

When you have reached a stable temperature add food to the indirect or smoke side of the grill, you can even add meat to the bottom grate as well. Just remember the temperature on that rack will be significantly lower, about 70 degrees less, than the top. Another great idea is to add a pan of beans or other dish, on the bottom grate. Not only will it cook but it will catch the drippings of the meat and add extra flavor.

If you need to smoke longer than 6 hours, you should replenish the briquettes early. Don’t wait until the burned pieces are too small to move around. Also remember the water reservoir will need to be replenished every 3 - 4 hours.

I love using the SNS for steaks. A thick steak can be smoked and then quickly seared before serving, giving us a beautiful medium rare inside and a beautifully seared outside.

The searing side can be used as a regular open grill. It is not often that we need the entire grill space and the SNS and will save you time and coals. The searing side can get very hot, much higher than your normal grill, so keep that in mind when setting it up for grilling.  You can also set the SNS up for baking and roasting. This simple accessory to your Weber grill will transform the way you cook.