Home
Smoking
Ways to Smoke Meat Without a Smoker 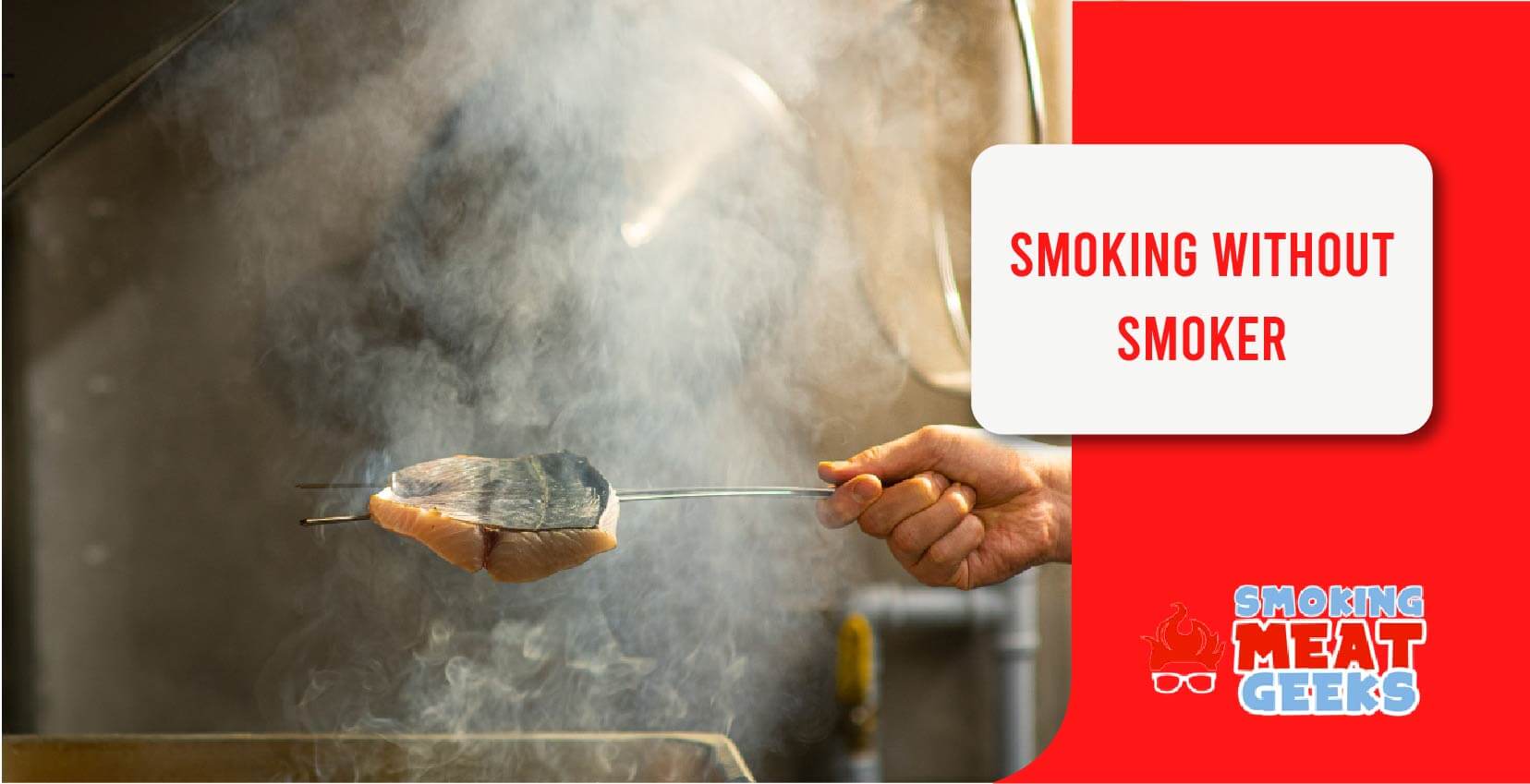 At first glance the statement doesn’t exactly make sense. A smoker is a purpose built device that allows the controlled burn of wood or a wood product, and contains the smoke in a chamber wherein food is placed. A box filled with smoke and regulated heat.

For a variety of reasons a dedicated smoker may not be available in your cooking arsenal. Whether it is limited space, the wrong place (and apartment or such), or you already have enough toys, you can still make meat and other foods with that smoky goodness. And we are here to help with that. 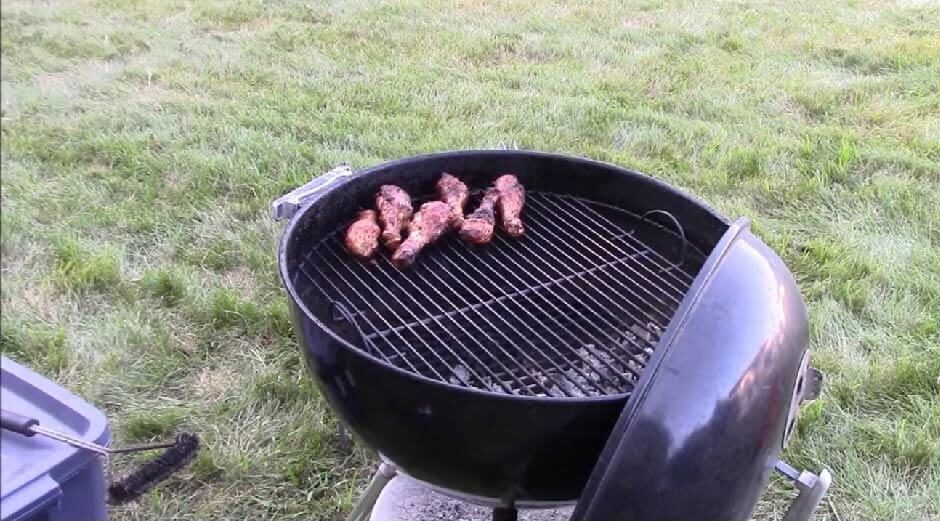 This is most common method to smoke meats at home without a dedicated smoker. In particular, a kettle style barbecue, egg or such, will lend itself to effectively smoking meats.

The main reason is that it allows for the meat to be out of the path of most of the heat, what we call indirect cooking. That’s a fancy name for putting the food on one side and the coals on the other side. Or, coals banked to both sides with the meat in the middle, you get the idea. 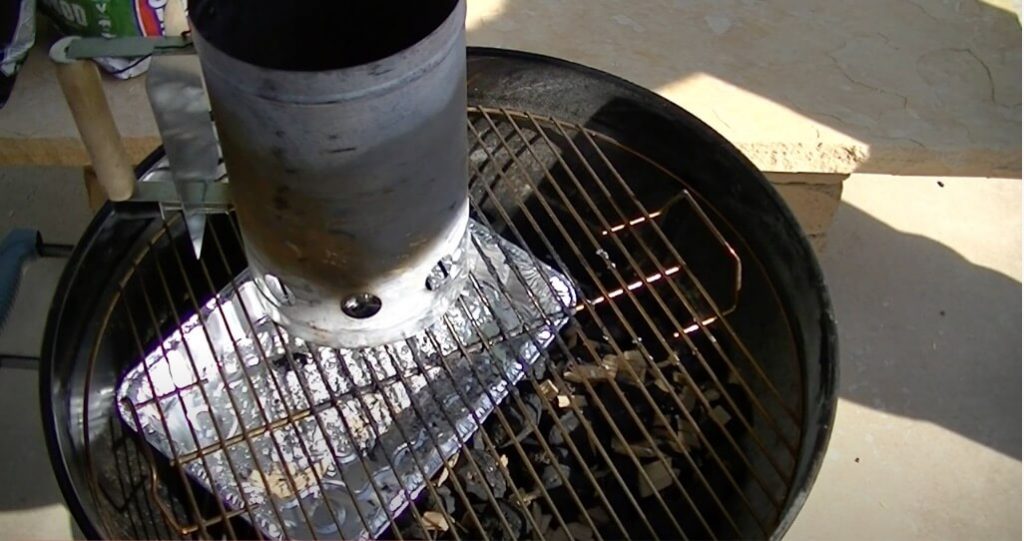 Preparing kettle grill for a 6 hour smoking session by stacking about 50 briquettes on one side and on the other placing a throwaway foil pan with water. After that, partially light about 10 briquettes in a chimney and then scatter them across the unlit coals before placing the lid on with vents 1/8 to 1/4 of the way open.

A contained barbecue with a lid allows the food more contact with the smoke to impart flavor, and the vents allow you to regulate air flow so that the fire stays lower. You can also use charcoal with wood flecks in it, or add wood chips or pellets on top of your coals, to get the smoke flavor you want. True long smokes, 12 hour brisket at 225 degrees for example, will require some management and attention to your device, but can certainly be accomplished with diligence and practice. 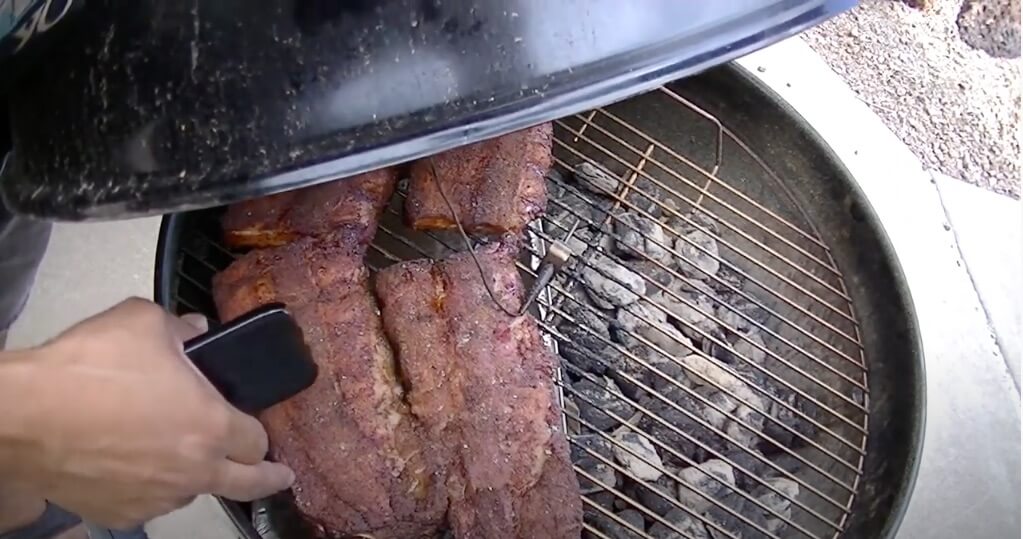 There are two choices in the market to add smoke flavor without having a flame involved. The most commonly known additive is liquid smoke, of which there are many choices for you. Less known, but available, are powdered smoke flavorings. These will both lend themselves to a few different cooking scenarios.

By far the most common way to use them is in a moist or wet cooking process. Cooking pulled pork in the crockpot or spare ribs covered in a slow oven give the smoke flavors a liquid to disperse into thoroughly, and time to permeate the meat. Also common is to use these products in your marinade or brine, imparting the flavor before the cooking process.

Obviously a dry rub will only work with the powder versions. Either a dry or liquid additive can be used after cooking, but your results may suffer. The flavors don’t get cooked in like real smoke, and there is often a bitter acridness that comes out when applied after cooking.

We’re not making that up, or involved in some cheesy mystery, there are devices literally called a smoking gun. Imagine a soft blow dryer device that puts out a plume of warm-ish smoke from very fine wood chips. Add a cloche – okay most of us just call this a dome – and you can infuse smoke flavors into literally anything that will fit. 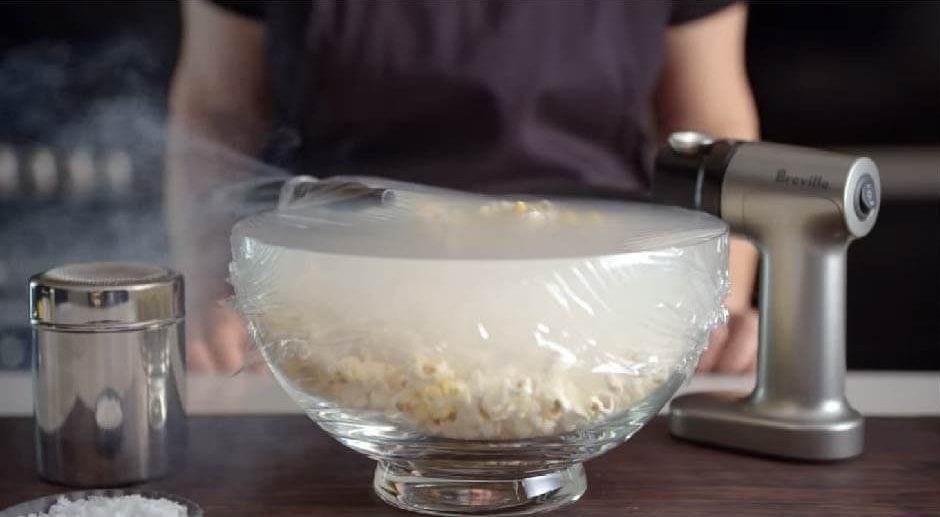 Do they work? Yeah, actually they do work within certain expectations. They will not get the deep saturation of a long term smoke or any of the bark on the meat we come to expect from great BBQ. They are most effective for immediate service, smoke it and go to table. Since we know that taste is based heavily on smell, when it arrives with a smoky aroma the food will be perceived to be smoky as well.

You can also add smoke flavor to the components that are going into your recipe. Smoke the salt, herbs or the seasonings and they can carry those flavors. Like the smoke additives, this is somewhat effective if you use it immediately prior to a marinade, brine, or dry rub step and then seal it to contain the flavors and allow them to carry into the food. Immediately prior to cooking will get mild flavors, again, better when used in a sealed environment like a crock pot or oven braising in a Dutch oven or such.

These toys can also be used in very unique ways aside from “smoking meat”. Not enough smoke in your whiskey? Put the whole glass in the cloche and fire it up. Throw some cheese in there and use it on a pizza for hints of a wood fired taste. Finish off your popcorn for a unique flavor. Some people even like to add a smokiness to their favorite dessert or ice cream. We don’t judge.

Smoking Indoors on a Stove

Recently, one of our Facebook fans asked me how he could achieve a tasty smoked meat without the use of a smoker (he lives in an apartment where the use of an outdoor smoker is not an option).

Here’s one way to make a stovetop smoker at home. This is one of the easiest involving just a large pot, some aluminum foil and a steamer. Don’t have a steamer either? No problem. 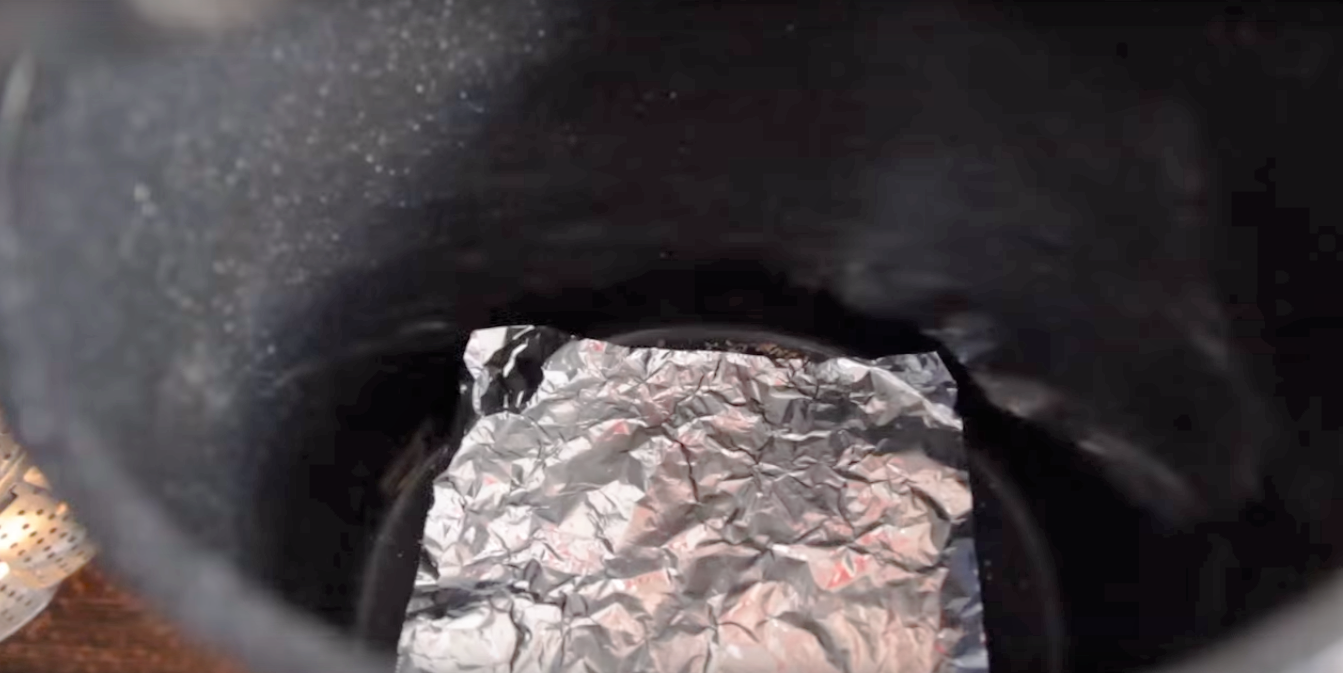 Start by lining the bottom of a large pot with aluminum foil and place a handful of wood chips on top. Be careful not to use too much. Next, place another layer of aluminum foil on top of the chips, just enough to make sure the drippings from your meat don’t land on the wood. 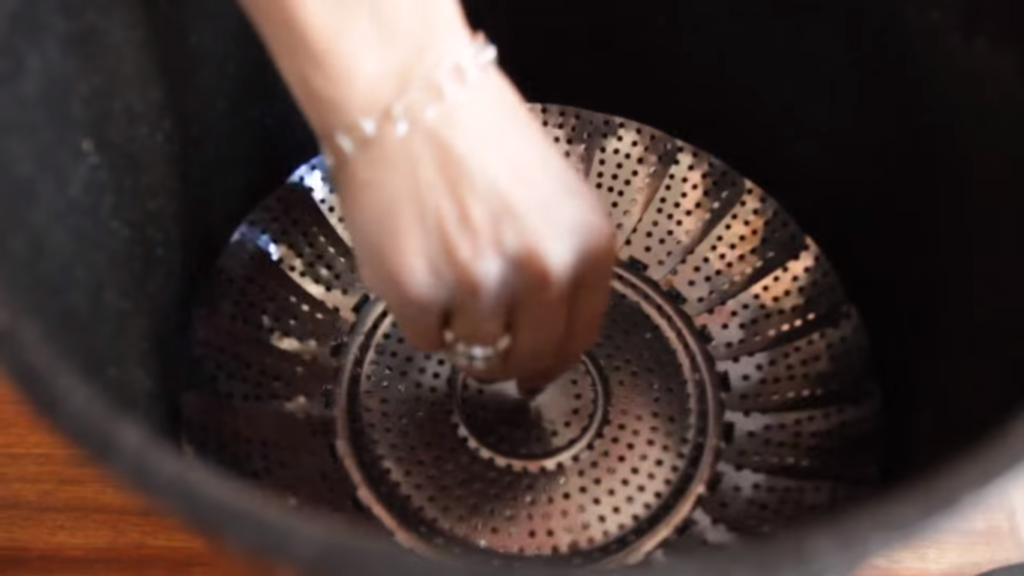 You’re now ready to put the meat in, arrange it in the basket so as much surface area is exposed as possible.
STEP 4 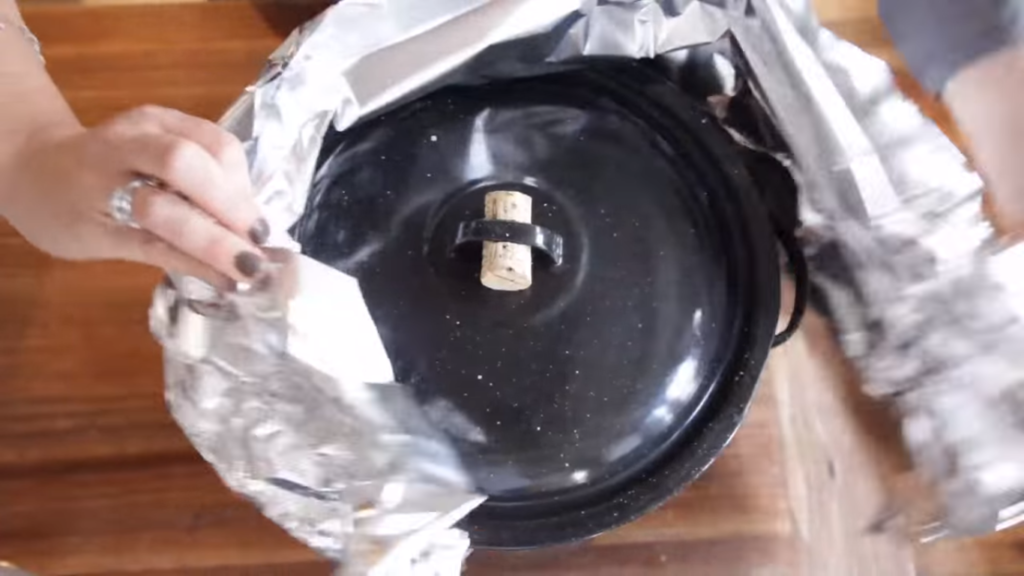 You’re now ready to put the meat in, arrange it in the basket so as much surface area is exposed as possible. Finally, cover the pot with aluminum foil before placing the lid on it. This will help keep the smoke in, otherwise the smoke will find a way to escape.

Your smoker is ready to go!

Your smoker is ready to go! Place it on the stove top and set the burner on med-high for a few minutes to get the chips smoking, then reduce the burner to low while the meat cooks.

This should provide some insights on how to achieve delicious smoke flavors without using an actual smoker. There are certain to be other paths to this goal, and like all geeks, we recommend learning as much as you need. And experiment. There is no be all and end all technique.

You may not be able to produce a deep hickory smoked bacon out of your kitchen, but then again you might hit pretty close to the mark. 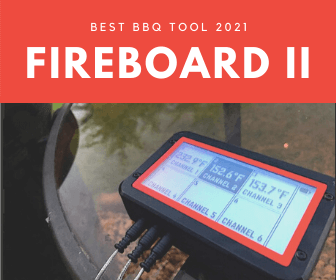