pan sauces bring a whole new experience to the table

These are some of our favorite stout beer pan sauce recipes.

All that talk of drink and meat pairings got us in the mood for beer. Not just any beer but, a mouth watering stout beer sauce...talk about delectable flavors. I’m already drooling.

What is a stout beer?

To make sure you do this right we need to chat about stout beer. There is a lot of confusion regarding the difference between stouts and porters. But don’t worry we’ll clarify all that.

A stout beer is dark and is made using roasted malt or barley, hops, water, and yeast.

However, back in the olden days, stout was just a fun nicknamed used for the strongest porter beers. In in the mid 20th century when smaller brewers started popping up all over the place the stout and porter beers became separate. These new brewers picked a few of the hundreds of styles out there and recreated their own beers. That means that while once stout meant, a strong porter, now it means anything the brewers want it to mean. 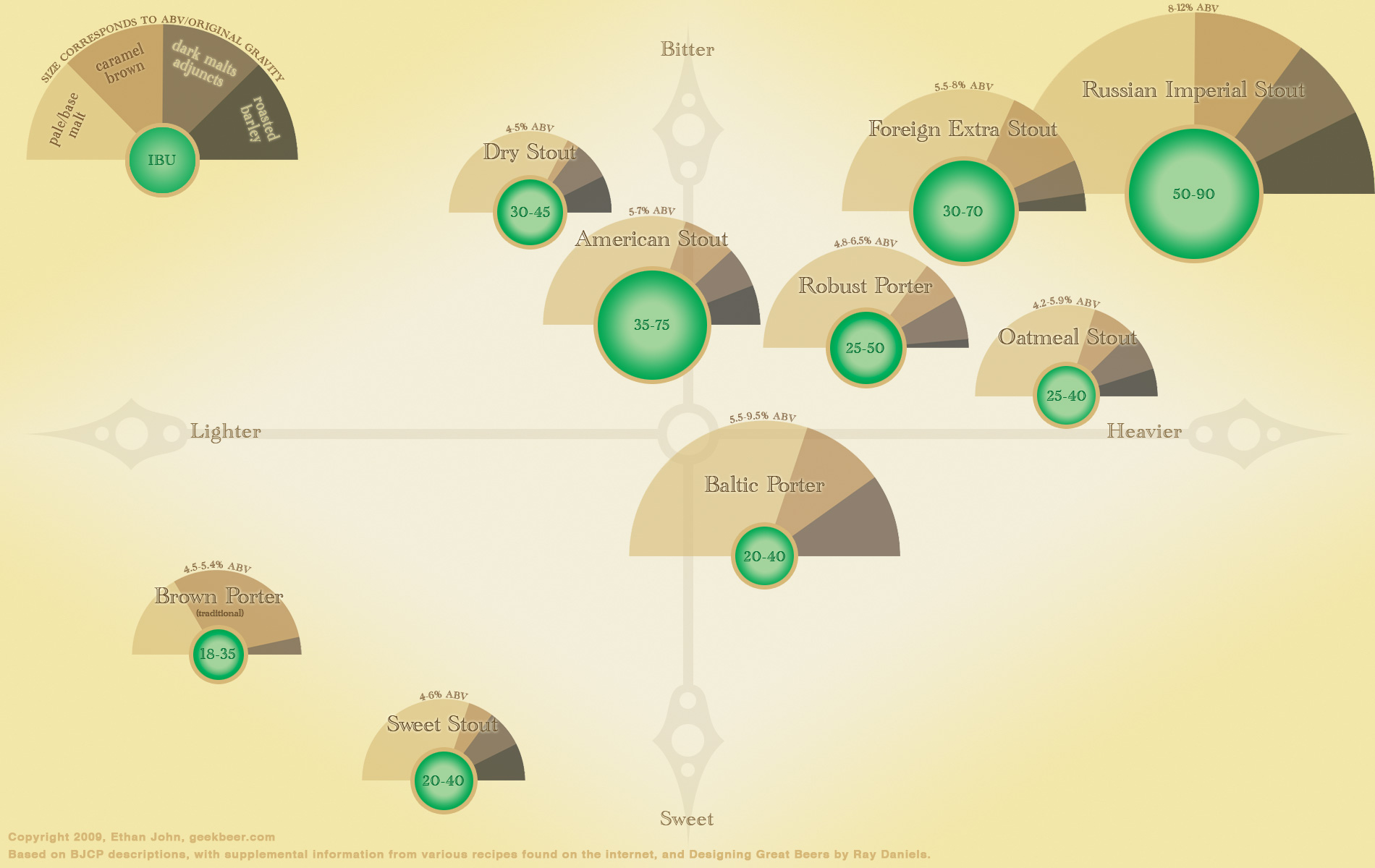 The line between stouts and porters is blurred. Graphic created by coolinfographics.com

When comparing a dry stout to a robust porter we find: the dry stout will be a tad more bitter, have less body and even be lighter than than a robust porter. This is a prime example how porters and stouts get intermixed as they share similar characteristics. Therefore, the difference between a stout beers and a porter beers is more likely found in marketing than the traits of the beer themselves. 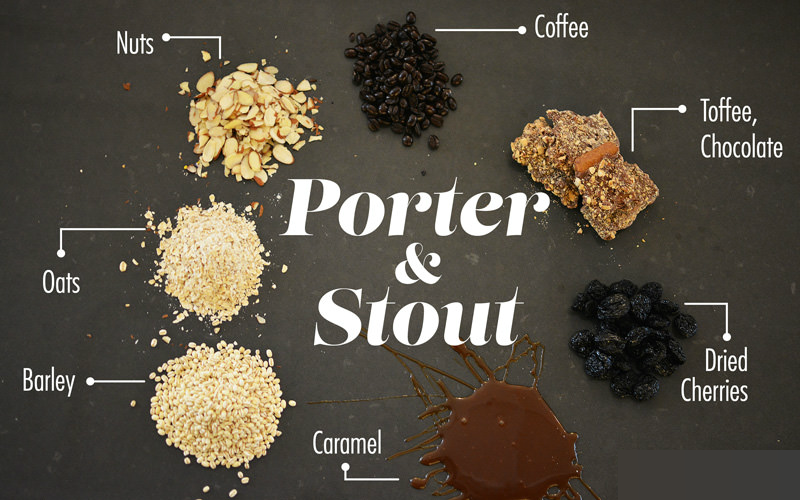 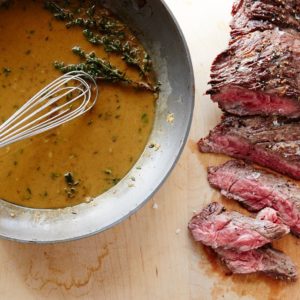 Before we introduce you to our favorite stout beer sauces and recipes, let's go over pan sauce.

First, you’ll need to cook the steak or other meat in a pan. Not just any pan, if you use a non-stick skillet then just forget about it, because the sauce will never come out right. You need a cast iron or carbon stainless steel pan. These pans will collect the bits and pieces that come off the meat, which you will need in order to make a great pan sauce.

Once you've pan seared your steak, you're ready to make a delicious pan sauce.

Most all of my favorite pan sauces start with sautéing garlic, onion, or shallot (or a combination of these three); while scraping up all the little tasty bits left in the pan. This gives you a great base for your sauce – the rest of the ingredients are usually decided by what type of meat I'll be serving with/in my sauce.

At this point it's time to add some type of liquid; since we're talking about making a stout beer pan sauce we'll be adding in the stout/porter beer now.  Fill the pan about a quarter inch with beer and let it cook down on a simmer till about half of the liquid is gone. This sums up the majority of what goes into making a pan sauce with beer.

From here you'll remove the pan from the heat source and likely add in some butter and a few herbs. If you're looking for a thicker pan sauce you'll likely work in some flour, cornflower or cornstarch during the simmering phase. 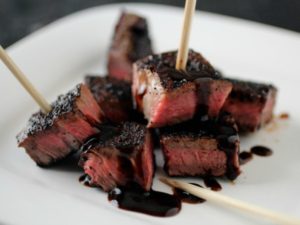 Finally our favorite, chocolate stout pan sauce. On a side note - you can make dozens of great dessert sauces out of stout as well. This is not one of those. This is about steak, real, delicious, stout covered steak.

This recipe calls for a rub which you'll apply to your steak in advance; this rub is key to the tasty little bits of flavor that will be leftover in the pan once your done searing your steak.

Mix up some salt, paprika, pepper and cumin. Then add in a heaping spoonful of coffee, yes ground coffee. Once it's all mixed together add in brown sugar and then rub onto the steaks. If you have the forethought, you can leave them in the fridge for a few hours, if not, just go for it.

After the steaks have been pan seared, and while they are resting, turn down the heat to medium and pour 1 cup of stout beer into the pan. For this, we recommend a chocolate stout such as Young’s Double Chocolate Stout; if you can't get a chocolate stout an oatmeal stout will do as well. When adding the beer be sure to scrap up all the little bits that have stuck to the pan; this process is known as deglazing.

After adding the stout, add a half a cup of beef broth over medium heat and reduce all the liquid in the pan by about half.  You're pretty much done. Now, just remove the pan from heat and stir in a tablespoon or two of butter. Yum!

Drizzle this sauce on your steaks and you’ll have the best meal of the season. 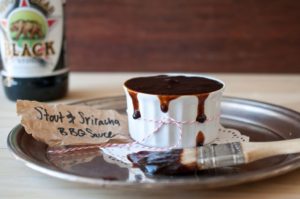 Sriracha is living the high life right now. Everywhere you turn there is a new Sriracha flavor something or other. Well, we are getting on board the bandwagon with this stout and Sriracha barbecue sauce.

After searing your steak in a pan, turn down the heat to medium and brown about 4 cloves or garlic in the pan, then add a cup of stout beer. After the amount of liquid has reduced by a 1/3, add in a helping of soy sauce, ketchup, brown sugar, and a few teaspoons of Worcestershire, Sriracha, and paprika. Mix and allow to simmer until your down to about a 1/2 cup of liquid.

This recipe is perfect for ribs or pulled pork.

A go to recipe is this stout glaze. It is very simple and versatile;  it can be adjusted to fit any recipe or meat.

Add all ingredients to pan while scraping up bits. Let simmer till liquid is reduced by half. Remove from heat to cool. Since a large part of this pan sauce consists of honey it will thicken as it cools.

This is the basic glaze and will compliment any meat, from pork to beef. But you can add more spices, herbs or vegetables (mushrooms) to make it your own.