What Is an Indoor Electric Grill? 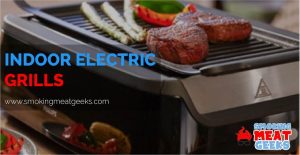 The words “indoor electric grill” pretty much explain everything, but we can dig a little deeper.

You can’t safely bring your regular grill inside. Both charcoal and gas grills produce carbon monoxide and need open space and airflow so you don’t die. There’s also risk of fire. Aside from the literal fire that’s in the moveable, tippable grill, the outside isn’t insulated the way your oven is, so there’s plenty of hot parts available to start something smoldering. If you want to grill inside, you need a specialized appliance that won’t kill you.

Electric grills can cook in a few different ways. 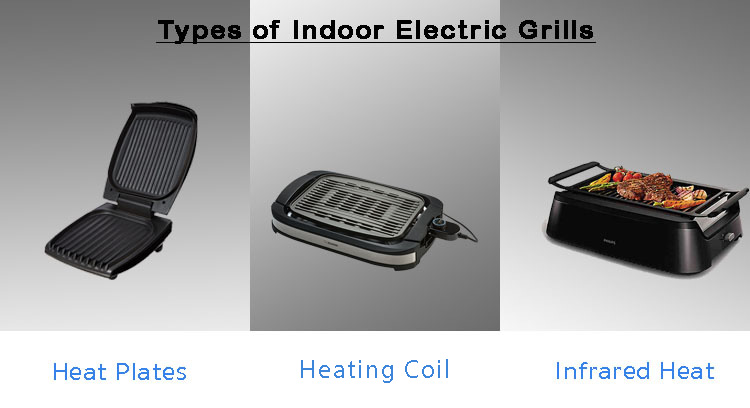 There are the kind like the George Foreman grill, which have heated plates that directly contact the food. This makes grilled food in the same way a grilled cheese sandwich is grilled – an odd artifact of English that is not what a Meat Geek is looking for. Others have an open grate with an electric heating coil underneath. The one we’re looking at today, though, cooks with infrared radiant heat.

Infrared cookers use what are basically superpowered heat lamps. Those lamps focus radiant heat up onto the grill grate and your food. They’re pretty powerful – our test subject, the Phillips Indoor Grill, claims 446°. The company also claims the grill is smokeless, and the design makes it clear how that’s supposed to work. The lamps shoot up at an angle so the drippings will just fall onto a drip pan and not onto the heating elements to burn. Even though it uses a different mechanism than other electric cookers, the infrared grill needs just as much power. Our subject draws nearly 14 amps, so it’s going to need pretty much all one home breaker can deliver.

Add it all up, and the goal is to have something that works like a grill, but won’t kill you with carbon monoxide or fire, and won’t set off your smoke alarms. If it can do all this, you can safely grill indoors year-round.

So, Why Would You Want an Indoor Grill?

Picture a great cook-out. Everybody’s hanging out in the yard and enjoying the good weather as the burgers sizzle over the coals. It’s a worthy goal, but not always available. What if you live in an apartment? What if it’s snowing, or 115° and disgusting? An indoor grill has great potential for folks who can’t grill outdoors, or can’t grill outdoors year round.

There’s a lot of power in the unexpected too. What if you could bring one of these to the office and fire up some dogs for all your coworkers? How about skewers of vegetables hot off the grill at a wedding reception? Surprise has a great flavor that pairs well with everything.

We wanted to give indoor grills the best opportunity to shine, so we turned to the top-rated model (as ranked by The Squirrel ): the Philips Smoke-less Avance Collection Indoor Grill, model HD6371/94. They have another model, the HD6372/94, which is exactly the same, but adds a second thin-bar grill grate to the thick-bar grate that comes with our test model. 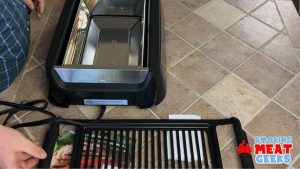 The Philips looked good out of the box. The base unit is well-insulated and well-balanced so it won’t start your house on fire or tip over. It has infrared emitters on the long sides with reflectors around to direct the heat up at the cooking surface. An aluminum grate sits on top of the base, and features plastic hand grips at a distance from the cooking surface. There is a big drip pan that slides into the bottom of the base unit. 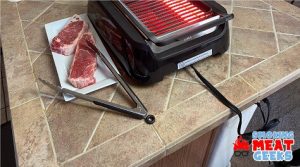 The cord is short and beefy, as appropriate to the nearly 14 amps the unit draws. You’re going to need to be close to an outlet, or have a very heavy-duty extension cord.

As per the instructions, we first powered it up to the warm setting, waited, then switched to hot. The manual says it will be up to temperature in 6-8 minutes, and that was accurate. After 8 minutes, we measured the grill bars at about 410° with an infrared thermometer. 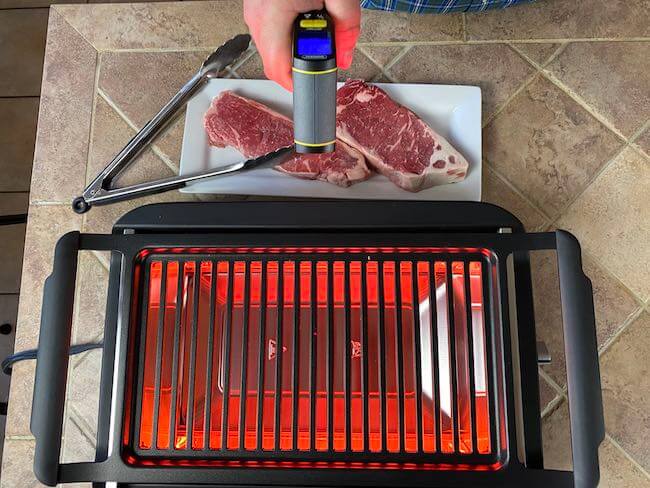 One issue: the manual says to not look directly at the infrared emitters, but there’s no place you can stand to actually use the grill without seeing them. 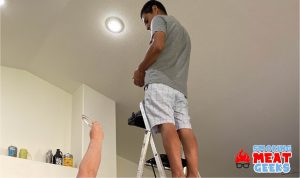 We planned three tests for the Philips grill; all conducted 10 feet underneath a smoke detector to see just how smokeless the smokeless grill was. The first was to grill some steaks to test the grill’s high heat performance and ability to get grilled flavor into the food.

The grill neatly fit two brined strip steaks and produced a satisfying sizzle as soon as they hit the grate. With no option to go to a lower heat, the plan was to flip them frequently so they cooked evenly. The first flip looked great – nice dark grill marks. The second flip was less promising, as the marks showed the grate had lost a good bit of heat.

As cooking continued, we saw the fat rendering nicely out of the meat and dripping down onto the drip pan. Things looked to be going well; our hopes were rising. There was clearly a little smoke coming off when that happened, but no more than some stovetop cooking. Unfortunately, the smoke detector did not agree with that assessment. About halfway through the cook, it started going off and didn’t stop. Now in the grill’s defense, our usual home detectors placed throughout the house never went off.

We persevered through the noise until the steaks were done. They finished a little faster than I expected – those infrared emitters can really kick out the heat. They looked great, about the same as if they were cooked on a gas grill outside. 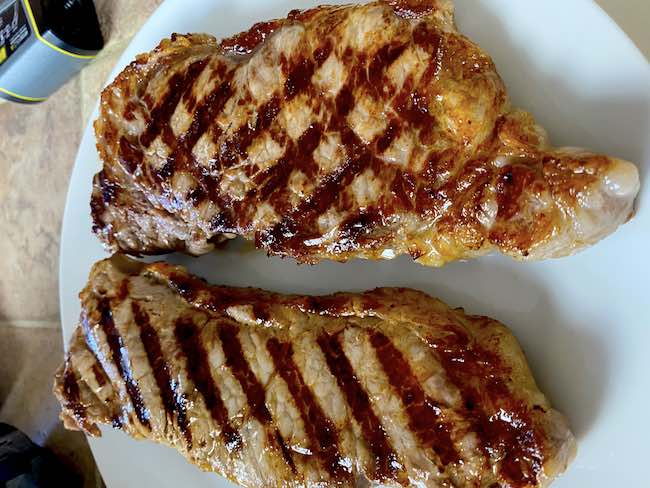 After a rest, we finished them with a little compound butter and went on to the taste test. 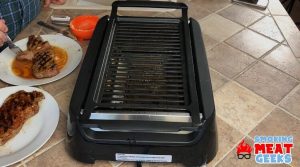 The taste was disappointing. For all the grilled looks the Philips achieved, there was no grilled flavor whatsoever.

These steaks were no different than steaks cooked on a grill pan on the stovetop.

We had other tests planned, but at this point, why?

The goal was a smokeless grill, and we were satisfied that it didn’t succeed. There was no point in seeing whether salmon skin could release cleanly if it didn’t taste grilled. 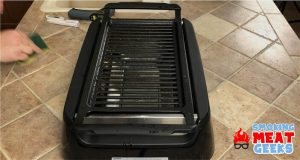 Here’s a positive. The grate and drip pan washed up really well with a sponge and mild detergent. The grate is, unfortunately, a grate, so you have to get into it and clean the sides of the bars, but that took only ordinary effort.

+The grill was easy to use and clearly well-made. I was impressed at how effective the infrared emitters were for cooking.

–The food, however, was not good. We came here for grilled flavor, and got absolutely none of it. It certainly wasn’t smokeless either.

Should You Buy an Electric Grill?

The special flavor that comes from grilling comes from a few places. If you’re using charcoal or adding a little wood to your gas grill, you taste the wood smoke. In either a charcoal or gas grill, when the fat drips from the meat, it hits the coals or flavorizer bars. The fat immediately burns, and the flavorful smoke goes up into the meat. Electric grills don’t do either of those things, so you’ve only got the flavorful effect of high-heat cooking. Now, you’ll see in our testing that the Weber Q 2400 produces a steak that looks the part. It also did a pretty good job on the chicken, but the same can be said about the final product — it lacked grilled flavor.

Should a Meat Geek Buy One?

No. Do your steak in a cast iron skillet and dream of spring.

Should a Non-Meat Geek Buy One?

Maybe? There’s reservations for sure. The Philips isn’t smokeless enough for a house unless you set it on your stove top and use the fume hood’s fan. It’s definitely not smokeless enough for an office unless you need a fire drill. The food is fine, but not grilled. A non-meat geek may enjoy the grill marks and the convenience, but a nice cast-iron grill pan is much cheaper and could probably do the job. 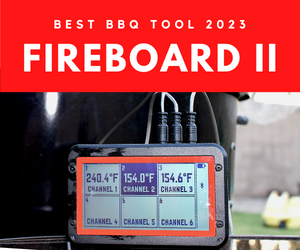 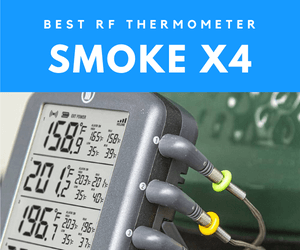