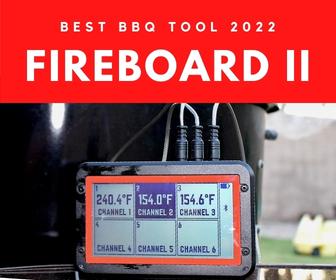 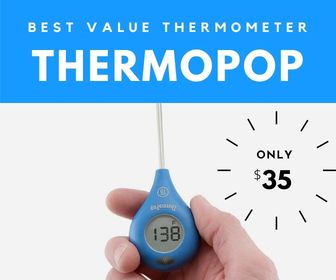 One of the craziest concepts that humankind has innovated just so happens to be the art of barbecue. Yet it seems that history only goes so far back to give us proof of where smoking meat was initially discovered. What we’ve discovered along the way is partly a timeline of what the motivation of early humans soon realized between the comfort and protection of fire and their food.

The Dawn of Man

You might be tempted to think of that opening sequence in 2001: A Space Odessey and remember those strange ape-like creatures beating a pile of leftover bones. At some point over 500,000 years ago, there is some slight evidence that a version of Homo Erectus called Peking Man may have been among the first cave dwellers that used fire to cook their food.

It was around this time that changes in the dietary needs of the early Homo Erectus were shifting into a diet that began to use fire to prepare and cook their foods. This theory supposes that food that was cooked using fire enabled this race to metabolize protein faster and reduced food toxicity due to a foraging diet. As a result, early mankind could then begin to grow in their population due to improved diets using fire as a whole.

Since this race of upright walking humanoids was also adaptive to making primitive tools, it’s likely they also fashioned cooking pits or suspended animal parts above a fire source to cook the flesh. Possibly, bits of meat were exposed to smoke from the fires which caused the meat to have a naturally smoky flavor. This would have been a huge improvement in the taste and tenderness of the meat itself, making it more popular to eat.

While this can’t be confirmed 100%, it’s natural to assume that modern people are creatures of habit. Once people get a taste of good barbecue, we keep going back to it because of the smoky flavors. It’s also the best reason why and how early humans began to smoke meat because it affected the flavor. But if that was the only reason, it wouldn’t have played such a vital role in early food preservation.

You see, what ancient man could not have figured out at that time was that their food could not be preserved so easily. It needed to be eaten so that tools made from bone could be used. This is when it would have become obvious that smoky cooked meat that was leftover on these bones wouldn’t decay as fast as simply cooked meat. And though this is all thanks to aldehydes and other compounds in smoke, they would soon see smoke as being useful 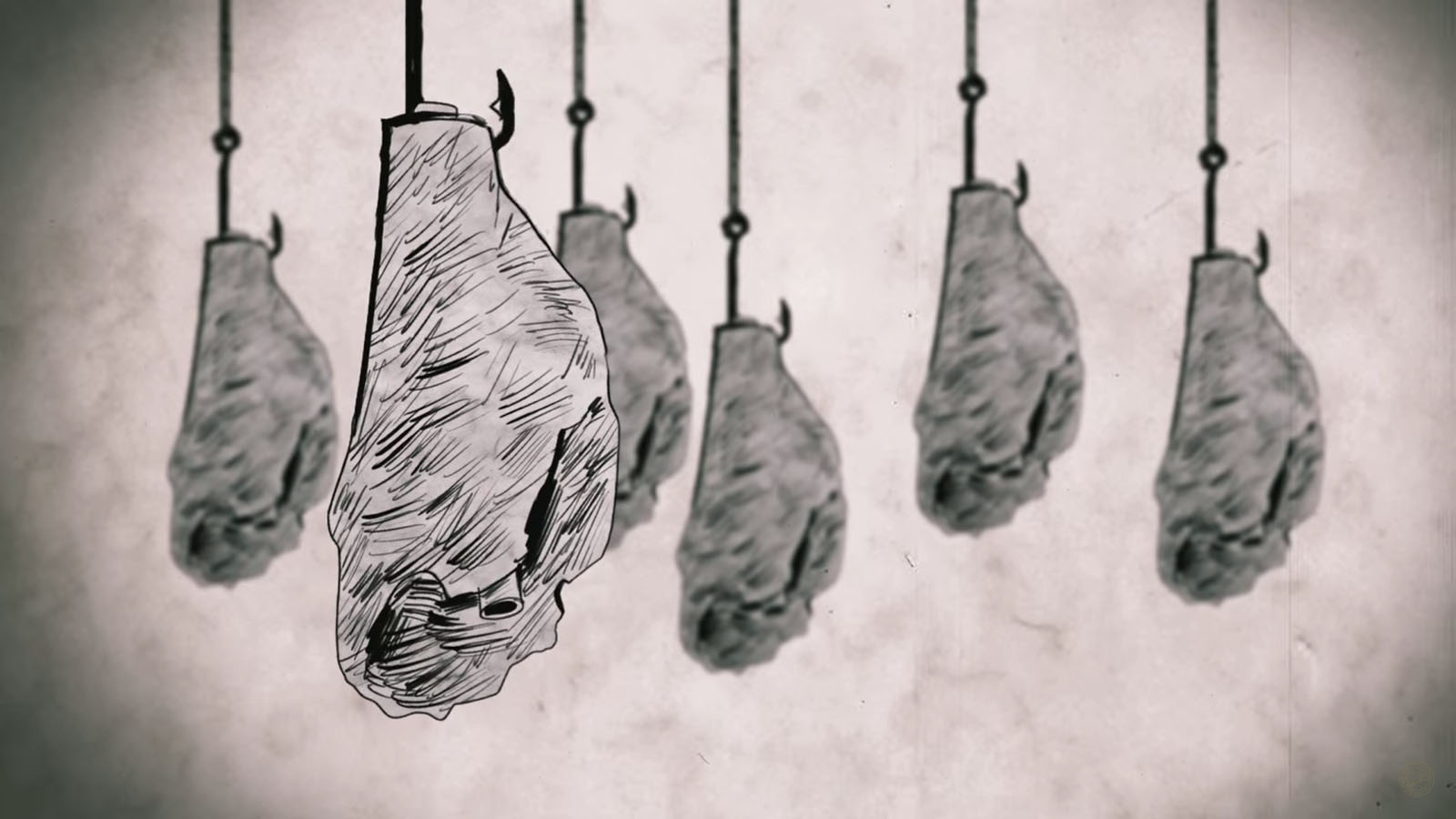 Early men did not start smoking brisket like a boss, but the information on what smoke would do to meats would soon start to be shared between colonies and groups. It might have been easier to transport cooked meats to others that could be traded or shared. Not only could this early smoking method work on any kind of meat, but it also worked wonders on fish and animals living in the water.

As evidence had further shown that life in the Paleolithic era, early experiments of preserving meat were accomplished using smoking huts. This would have been helpful to destroy germs and microorganisms that were slowed down and even stopped completely by smoking their meat. Smoke also helped to dehydrate food which adds to the overall flavor and aroma.

It would have been more common for communities living near rivers or bodies of water would also learn to catch as much as they could to later smoke these foods so they would last longer in months where food was scarce. This method not only spread like wildfire throughout the early Stone Age, the smoking methods only got better with time. This also helped with discovering which burning fuels were safe and were not.

As we all know these days, hardwoods such as oak and hickory make the best smoke flavors. There are also many reasons to use fruit woods including apple and cherry that help make fish or poultry taste better likewise. But for early Stone Age smokers who learned to use wood including pine, cedar, or sycamore would find this made the meat taste terrible. Not only are these types of wood bad for smoking, but the sap and terpenes are also highly toxic!

This is likely the point where early barbecue smokers started sharing stories about which wood works best and which meat should be used. Learning about which wood to use and which wood not to use, was likely trial and error and would have resulted in stomach sickness or toxic effects from the sap and terpenes which make the smoke poisonous. The next big steps in smoking meat were truly biblical in the making.

On the 8th day, let there be smoke! 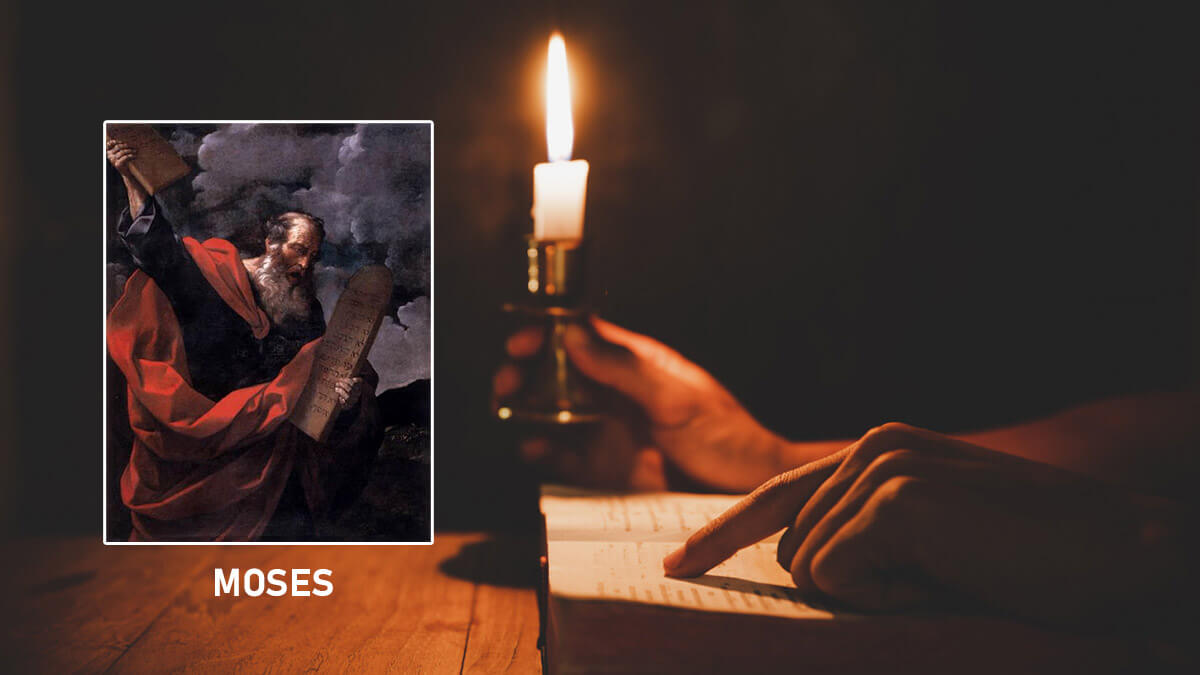 We’ve all heard of the Old Testament which most people feel tells an accurate story of biblical events. The original version was written in Hebrew and was originally around 1500 years before the time of Christ. Well, it seems that Moses had more than a few requests than just the 10 commandments. Moses instructed his followers to build a big smoker with ash pans, a grate, and hooks for animals to be sacrificed in God’s name.

Moses gave the instructions on how to make this smoker and how to work it, but more importantly, how to make it easy to transport. Later, by the time you get to Chapter 29, it’s a curious note that Aaron (Moses’ brother) realizes that God wanted a smoker to enjoy the smell of this barbecue sacrifice, yet the rest of the smoked meat should be enjoyed by Moses and the rest of his priests. Talk about one of the earliest and holiest grill parties!

But that information we likely shared with the Egyptians who also enjoyed smoking meats. Not only that, Egyptians had been better-known for their practice of preserving nearly anything! But unlike making mummies, they also preserved many foods for mummies that would last just as long as their mummies would. They were among a select few that would salt and smoke their meats which added a whole new layer to meat preservation.

Aside from salting meat before it becomes smoked, the methods for smoking became so prevalent in the following centuries, as the practice was obviously tried and tested. All across the world, these smokingly effective secrets were shared with the Chinese, Greeks, Romans, and eventually the western world. Between the 5th to 15 centuries, early Europeans preferred this method and flavor with the emergence of smokehouses.

Smokehouse flavor is nothing new 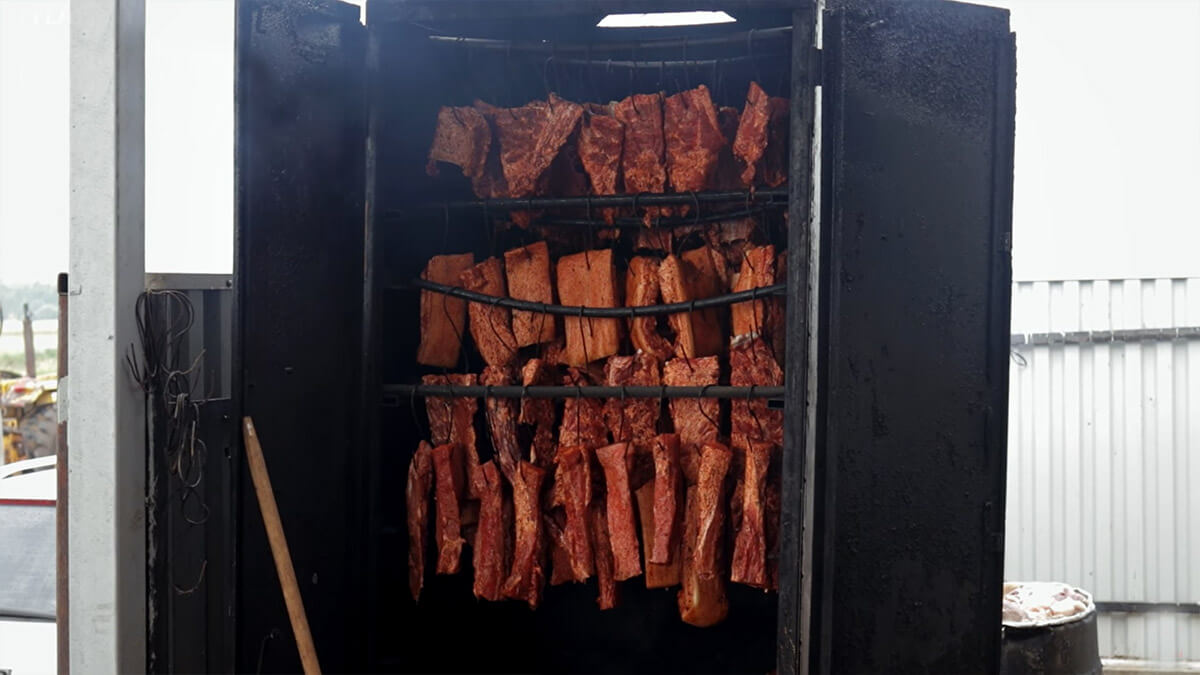 If you’ve noticed anything about smoking meat, different types of smoking are meant to produce different effects. There is hot smoking and cold smoking that is used in meats, but only cold smoke helps preserve meat. This is where smokehouses only use cold smoke where temperatures rarely go above 100 degrees Fahrenheit. Meats are often salted before they become smoked but afterward will become cured meats.

What we see more often these days is hot smoking that can be adjusted so the meat will cook at longer temperatures but still gets exposed to smoke while it cooks. Smokehouses were popular buildings that can still be seen across Europe. In the UK, old smokehouses are still standing due to the wild craze of smoked fish and pork which were the preferred cured meat that people there still love to eat.

Many of the older smokehouses that were constructed in the 17th century were at least 18 feet tall and no more than 6 feet wide. This is also where items such as sausages, salmon, pork, and duck were all smoked to perfection. As if this was a typical practice that was isolated within most of Europe, it was a bit of a surprise that Spanish sailors encountered native Taino Indians. 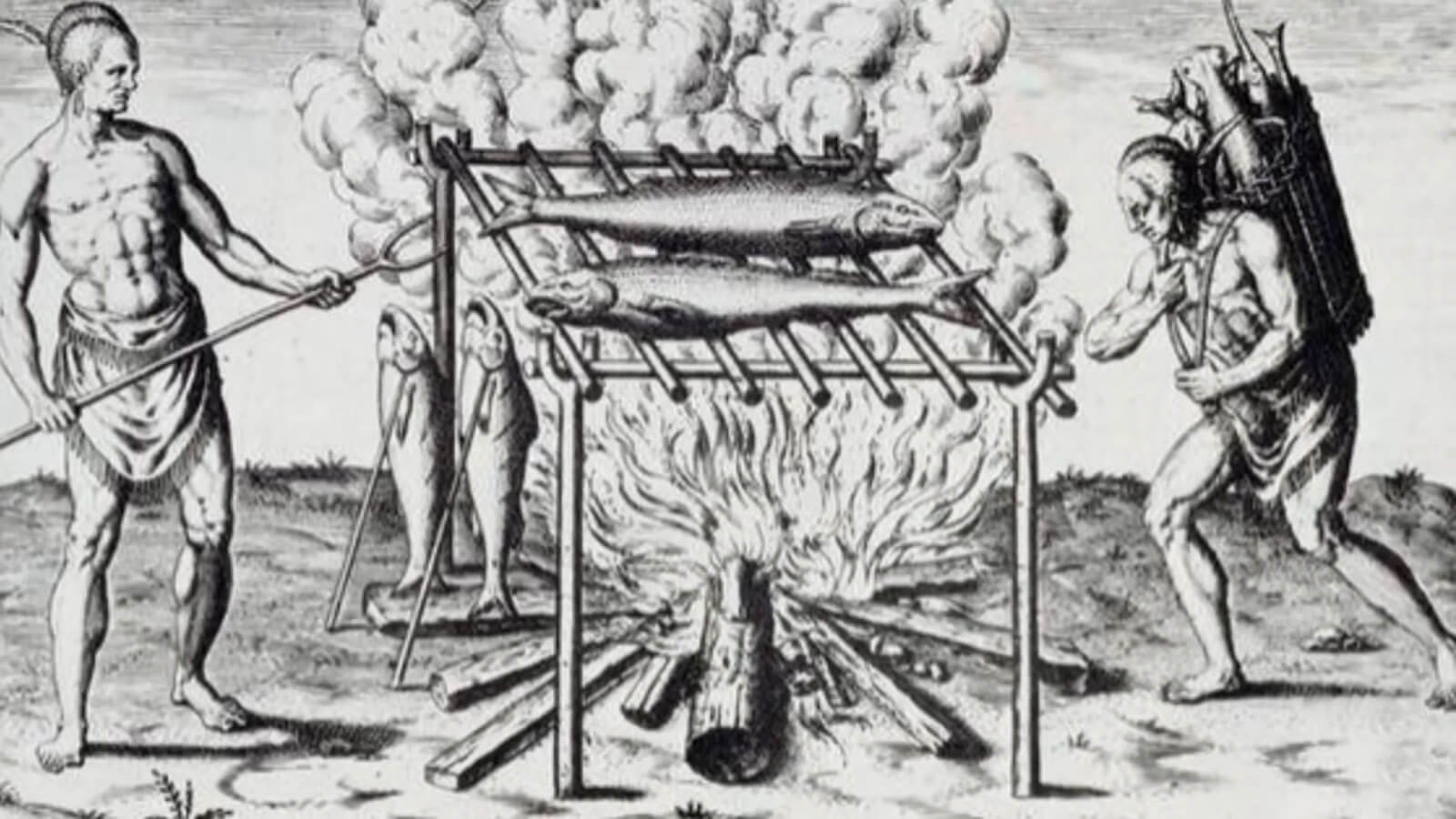 They found this isolated Indian tribe smoking their meats on a wooden rack above a fire which the Taino people called Baracoa. The Spanish would ultimately transform and translate this word into barbecue. But that’s not the interesting part since smoking meat in the Caribbean and throughout the early exploration of the Americas way back in the 1500s. By the time America was founded, European colonists brought their smoking skills with them.

The tradition of smoking meat not only helped early Americans cure their meats, but they were also still using the same methods passed down from previous generations. This went a long way for early Americans since salted and cured pork could last for such a long time. When it comes to traditional barbecue smoking methods, the passion for hot smoking is now more common than the practice of cold smoking.

It also seems that cured meats are not as important for preserving meat for long-term needs ever since refrigeration and freezing are so commonplace. But if there was ever a fad that never lost its appeal, smoked meat flavor is simply something that’s part of the human experience. Perhaps it gives all of us a taste of what our distant cousins from the Stone Age might have been so excited about when they tried smoked meat for the first time.