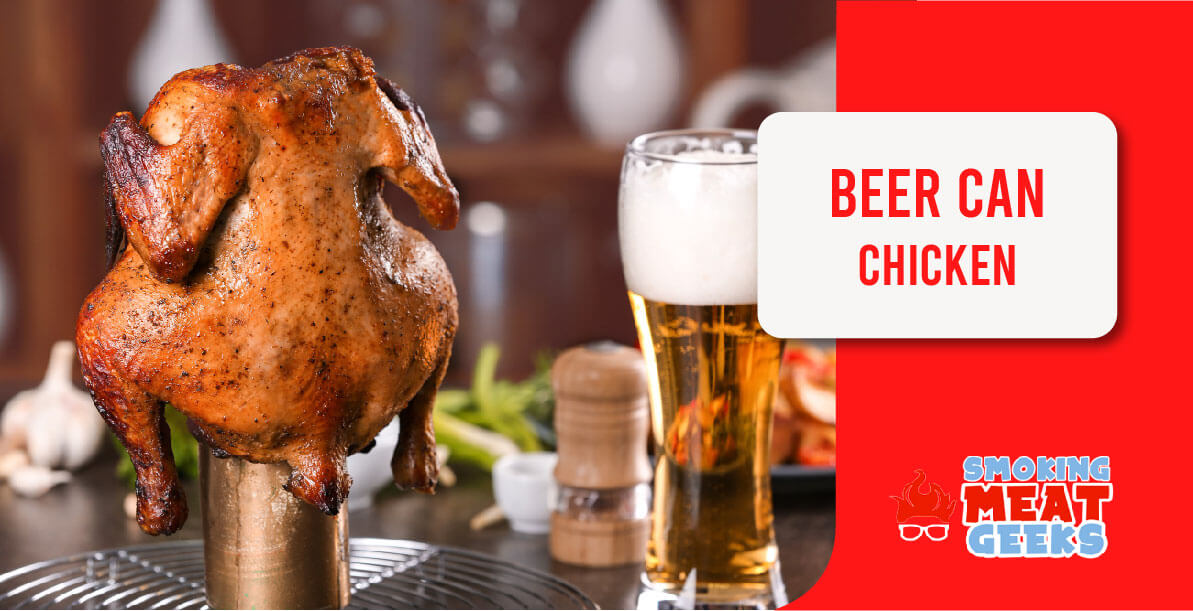 Does beer can chicken actually work? At best, what are the results that you get when you are finished?

The first result, and possibly the sole redeeming feature is a beautiful well colored skin in 360 degree panorama view. Sadly, that is about all you get out of the process.

The theory is that the moisture from the beer will keep the white meat juicy while everything is cooking. Sadly this is not the way the results bear out. You can put rosemary sprigs or other seasoning in with the beer and you will impart some very delicate flavors to the chicken meat, but pretty much just the meat right on the rib cage and bones takes any flavor. The reason it doesn’t work well begins with the science of cooking chicken.

Beer can chicken is great – but it has nothing to do with the beer (or the can for that matter). 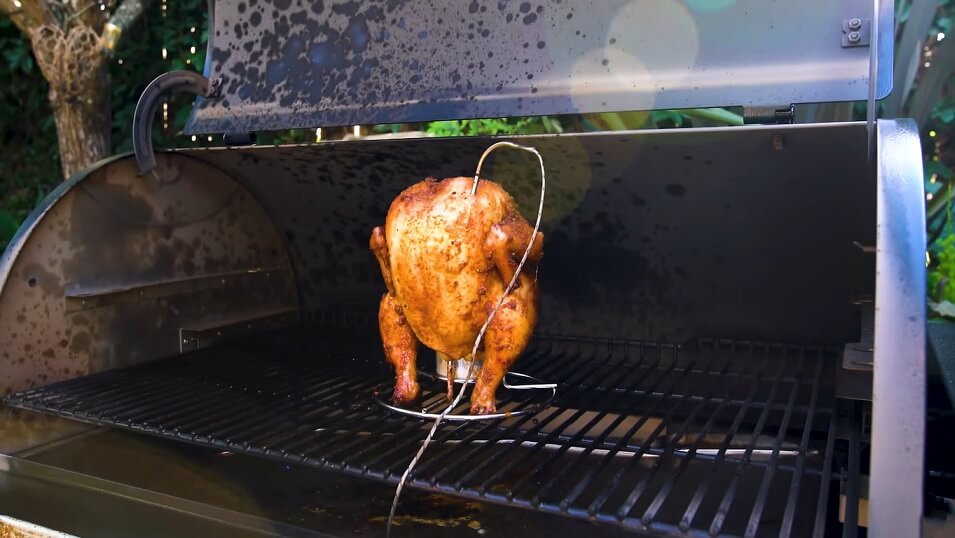 To understand how beer can chicken is a waste of time let’s review how it is done. A chicken is prepped for the grill while the cook drinks half a can of beer. The half full (or half empty) can is then punctured at the top and placed inside the cavity. The bird rests vertically on the grill, on top of the can, with drumsticks for balance. The chicken is roasted for approximately and hour and a half until the internal temperature of the breasts are 168°F and the thighs are 180°F.

When it’s done, if it was done correctly, the chicken will have a crunchy skin, beautiful browning, and tasty juicy meat. Yum!

All of these great qualities are the result of your own roasting prowess, but they have nothing to do with beer.

Examining the Science of Beer Can Chicken

The beer in the can must become hot enough to boil and let steam escape in order for it to add moisture to the meat. The boiling point of water is 212°F and the boiling point of ethanol is 173°F. Since beer is mostly water, the can of beer must reach a minimum of 212°F to produce the necessary steam.

Numerous experiments have been done by various grilling masters, and the average high temperature of the beer, in their experiments, is 130°F. Several dozen degrees from boiling.

The beer can in placed inside the cavity of the chicken and it acts as a thick, meaty, watery insulator, keeping the beer from becoming hot enough to boil. This is further evidenced by the amount of beer left in the can once it is removed after roasting.

The beer can hinders even heat distribution:

The beer can blocks heat from reaching the center of the chicken. If you’re not careful, you’ll either burn the outside or undercook the inside. 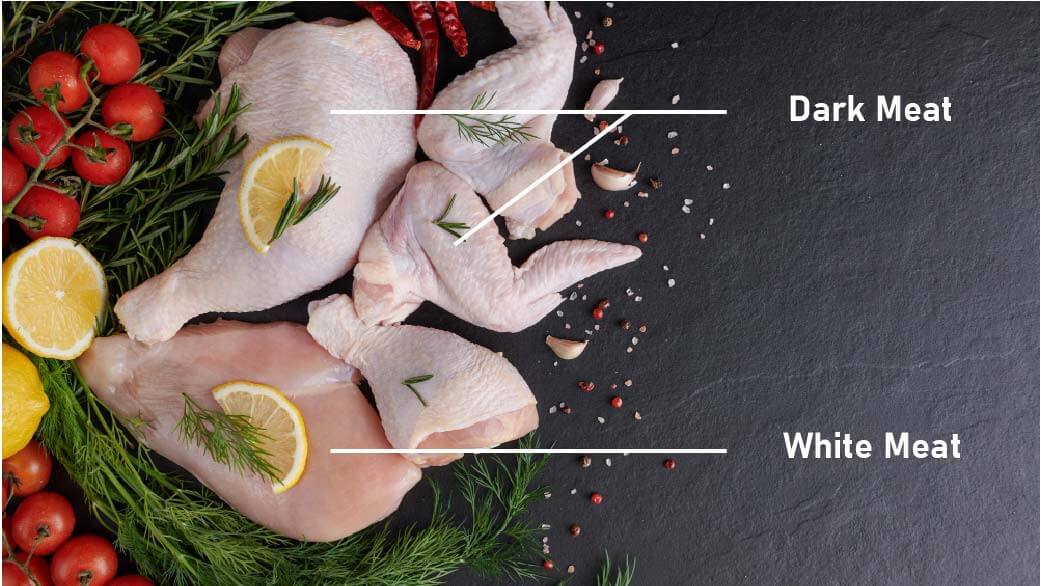 The science of cooking chicken is that white meat is actually considered fully cooked at lower temperatures than dark meat. White meat is safe at 160°F. Depending on the size and how high the applied heat has been, you can safely remove it from the heat at about 155°F and carry over cooking will finish it. Dark meat needs at least 165°F to be considered safe, and many folks like to take it to a higher temperature to break down some of the connective tissues and such, some as high as 180°F.

Beer can chicken fails on both counts. Convection will take the heat to the uppermost area of your cooking chamber. Guess where the white meat is? Sitting right up there getting most of the heat. Typically a breast section is thicker than the hind quarter, but it is also composed of more delicate meat that absorbs heat a bit easier. The worst aspect is that all the natural liquid – juice – drains out as it gets warmer and moves, gravity pulls it down further drying out the white meat.

Unless you pre-heat the liquid in the can you’re wrapping the dark section that needs to reach higher temperatures, around a cold sink relative to the rest of the cooking area. In short, you slow down the dark section cooking speed even further, it takes longer, white meat dries out more…you get the point. Conversely, the chicken meat insulates the beer can keeping it from reaching a high enough temperature to create the steam that helps with the moisture in the chicken cavity.

Given the above, we know the beer does not come into contact with the meat. It never escapes its aluminum dungeon. No contact equals no flavor. In addition, beer is 98% flavorless (water and alcohol); sugar, proteins, acids, and minerals all makeup only 2% of beer or approximately 1 teaspoon of flavor. If any of these flavors ever did escape, they would only continue to rise directly out of the top of the chicken.

Safety is a Concern… 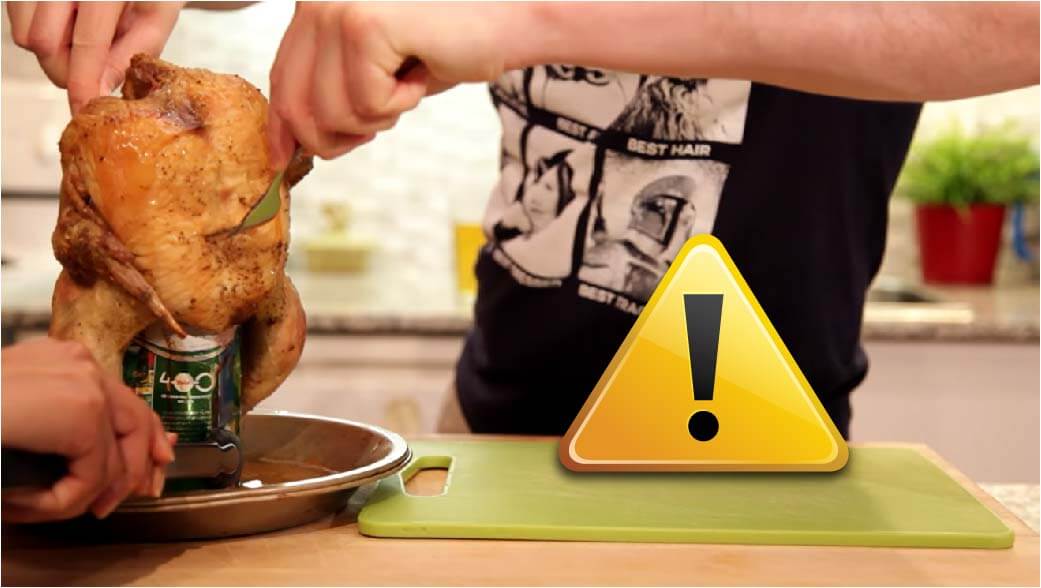 Trying to remove a beer can chicken from the grill is a trick only mastered by experience. Where do you grab it, by the can or the chicken? The can, which is heated, can often stick to the chicken making removal tricky.  Spilled beer and chicken fat is a mess to clean up, but worse if it lands on you, because then the nurses at the ER will have to clean it up.

Surely, the ink on the cans is not food grade, also some brewers use plastic liners, neither of which is tested at cooking temperatures. Allow us to present a safer alternative to the myth known as Amazing Beer Can Chicken.

Top Geek
We’re going to talk about smoking chicken at a higher temperature, in this case between 350-375°F. The other aspect is how we cut the chicken. You’re probably familiar with a Spatchcock chicken. Remove the spine and butterfly the bird. This gives you a more consistent thickness for more even cooking. We’re going to add a quick step for easier handling, ending up with split chickens.
Print Recipe Pin Recipe
Prep Time 45 mins
Cook Time 3 hrs 45 mins
Course Cooking Technique, Main Course
Cuisine American
Servings 1 Whole Chicken
Calories 115 kcal

Tip: When it comes to yielding juicy chicken hitting the target temperature for chicken is imperative. The difference between a succulent chicken breast and a dry one is about 5 to 10°F. If you don’t have a trusted meat thermometer for the grill check out a few here.